FIA WTCR - Race of Germany - 03-05/06/2021 • He came, he saw, he won! Despite some technical problems during the qualifying session, Jean-Karl Vernay got his Hyundai Elantra N TCR on the first row of the starting grid (P2) for Race 2 of the Nürburgring round. Ideal to launch his season!

A wise and solid Race 1

Ninth at the start of Race 1 (inverted grid), Jay-Kay got off to a perfect start and gained two positions, also taking advantage of a huge mishap by Michelisz. But little by little, the Lyonnais was caught up in the aspiration game. First by Girolami, then Michelisz and finally by Coronel in the last lap. Vernay did not take any risk in this first race which he finished in 10th place, the objective being to preserve the full potential of the car for race 2.

At the extinction of the lights, Jean-Karl Vernay overtook Girolami without a blow, the poleman even being overtaken by Engstler despite an aggressive defense. The Hyundai Elantra N TCR cars were in the top two positions and they went on a one-two punch during the three laps of the race on the Nordschleife, giving the Engstler Motorsport team a great one-two finish. The Frenchman, who set the fastest lap in the race, also took the lead in the championship, ahead of Tiago Monteiro (winner of race 1), and Nestor Girolami.

“Winning the first race with the Hyundai Elantra N TCR in the first round of the new WTCR season, with a new team and Hyundai Motorsport Customer Racing is a pretty cool feeling. “ said JKV. “Luca [Engstler] and I have been on the pace all weekend, so it was fantastic to bring home the team’s first WTCR result. I’m looking forward to more success in the rest of the season. This morning we were struggling a little bit and we found out why, but in race 2 it was perfect. I made some changes to the set-up and it really worked. The key was to get a better start than Nestor [Girolami] and that’s what we did. After that I was really in qualifying mode, I pushed and the car was behaving amazingly, I was driving at 150%. When you feel good, you can take risks and it comes naturally.” 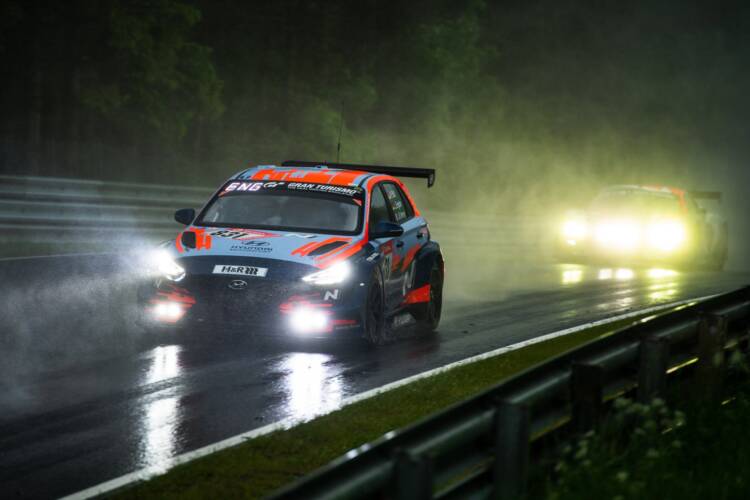 Would you take another 24 hours at Nürburgring?

The weekend wasn’t over for Jean-Karl Vernay as a few hours later, aboard a Hyundai i30N, he set off for the 24 Hours of Nürburgring with Luca Engster and Hendrik Still. Once again, the Hyundai colors were to shine. Qualified in 2nd position, the crew completed the double clock lap in the same position, only 2/10ths behind the Elantra driven by Marc Basseng, Manuel Lauck and Moritz Oestreich who won the category.