WTCR - Motorland Aragon - 10/31/01/11/2020 - In quest for victory since Macau in 2018, Jean-Karl Vernay returned to the top of the podium in the first Sunday race. An undeniable success at the end of qualifying which showed the full potential of the Alfa Romeo Giulietta Veloce prepared by Romeo Ferraris.

The Frenchman was in the running during qualifying. Vernay was consistently in the top ten in free practice, setting the third fastest time in Q1, fifth in Q2 and first in Q3! Unfortunately, his convincing pole position was erased from the tablets by the stewards for not respecting the limits of the track, which did not fail to make the driver enter in a cold anger. 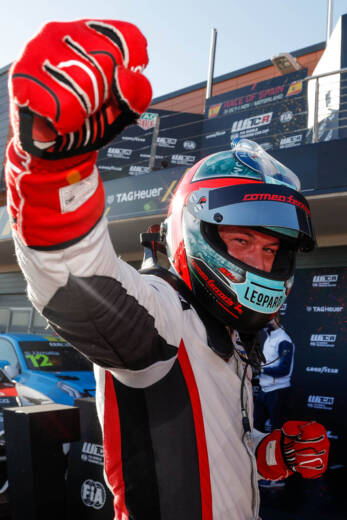 In Race 1, Vernay started perfectly from the second row behind Magnus and Michelisz. While Michelisz was going back to his left to control Magnus, to no avail, “Jay-Kay” stayed in line and took the lead from the first corner. We wouldn’t catch him again. He was on a full attack lap and he had a little bit of margin. A trio composed of Vernay / Urrutia / Magnus then took off on the rest of the pack and reached the finish in this order, without the driver of the #69 in control being worried by his pursuers.

“I am happy” declared Jean-Karl in a post-race conference. “Following yesterday’s decisions, I told myself that I wouldn’t speak at a press conference if I finished on the podium. I was so angry because of this inconsistent penalty! I’m okay with taking a penalty if I make a mistake, but everyone has to be treated the same. Well, it was a hot reaction, maybe a little stupid. I quickly refocused on what I had to do and got a very good start and then, I won’t say I controlled the race, but most of the work was done. Santi was very fast and he also wanted victory, he pushed hard. I exploited my car to the best of my ability, pushing it where I could make a gap and controlling the other sectors of the track. We can be happy and very proud of what we are doing, what we are achieving as a small team. »

What followed was not as exciting. After a new very good start in Race 2, Jean-Karl Vernay was forced to retire at the beginning of the second lap due to a technical problem probably caused by a contact.

In Race 3, Vernay started perfectly once again and maintained his fifth position for many laps before giving in to Magnus’ attacks. Sixth under the chequered flag, the Frenchman scored good points to move up to third overall and maintain his WRTC Trophy lead.

With work on the Italian circuit of Adria having been delayed, the last round of the season will finally be held on the same Motorland Aragon circuit on November 14 and 15, WTCR tittle in play.