The WTCR Trophy for Vernay!

FIAWTCR - Aragon - 13-15/11/2020 - What a final! Mathematically, 11 drivers could still win the world crown at the end of the last meeting in Aragon. Third in the general classification, leader of the WTCR Trophy, Jean-Karl Vernay hoped to consolidate a position already exceptional and well above the objectives of the start of the season.

At ease in free practice (3rd and 2nd), the Frenchman remained solid in qualifying: 5th for the whole session. However, Race 1 was not going to live up to his hopes. By succeeding in hot starts, there comes a time when it doesn’t work. In 2nd position, the Alfa Romeo Giulietta Veloce TCR by Romeo Ferraris was stuck on the line when the lights were switched off.

JKV was in eighth place after two laps because of the lack of grip on a very wet track. In these “impossible to drive” conditions, he was struggling to keep his car on the track, like many of his competitors. Starting from 16th place with a bold tire choice (rain in the rear, slicks in the front), Guerrieri moved up to 2nd position and won the race, with Girolami pulling away from his teammate a few corners before the finish. Vernay retained the 8th place points, but was holding up his chances in the overall standings.

In Race 2, no impulse problem this time. Right from the start from 6th place, the Frenchman gained two positions. While Muller started for a long solo rider in the lead, a serious fight started behind between Magnus, Michelisz, Vernay and Azcona.

Michelisz was swallowed up on lap 2, Magnus gave in on lap 5. Vernay was no longer worried until the finish, his 2nd place allowing him to win the first WTCR Trophy in history. Ehrlacher, 6th at the finish, won the title of champion WTCR 2020.

“We are a private team, so we are also fighting for the WTCR Trophy and we can be proud to have won it” testified the driver of the #69 at the finish. “That was the team’s first goal and we achieved it. I’m really happy for the team. It wasn’t easy, the Audi drivers were pretty strong competitors. The first objective has now been achieved and we can focus on the overall podium. It won’t be easy, I have all the guys from Lynk & Co in front of me and I’m sure they also want Yvan on the podium. I’m going all the way, I have nothing to lose. I was annoyed by Race 1, obviously, because we lost a lot of points, but that’s how it is, we all make mistakes. We demonstrated a great mentality and we never give up, as we just showed.” 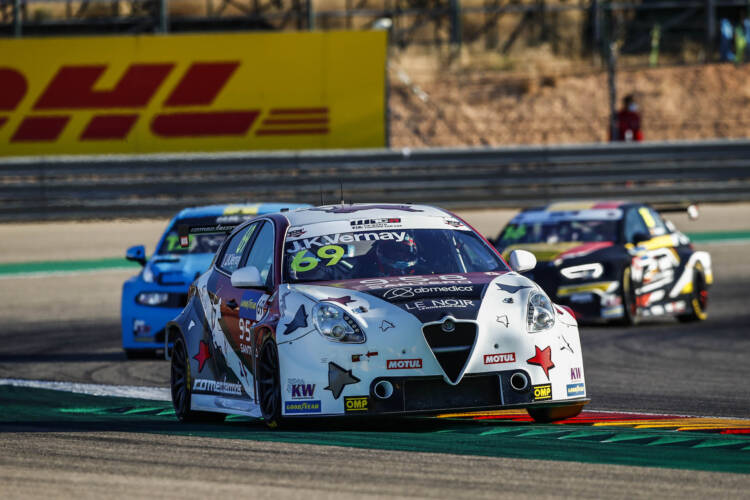 Once again prompt at the start of Race 3, “Jay-Kay” passed Björk to take 4th position. On the second lap, he passed Berthon in a splendid outside and inside maneuver when his team asked him to get rid of the Audi as quickly as possible. The first three, Urriatia / Ehrlacher / Vernay, at a good distance from each other, joined the finish in that order to complete an exciting WTCR season.

Comment of the driver: “First of all, congratulations to Yann. As I’ve always said, I’m very, very “Frenchy” and to see a Frenchman win the title is great. This title is well deserved, I think Yann did a fantastic job […]. On our side, we had another good weekend, a good qualification despite some mistakes in Q3. We made a bad tire choice in Race 1, like others. Then we did a fantastic Race 2 and Race 3, some overtaking and incredible starts. Our 3rd place overall is a great reward for the team. A big thank you to her, I don’t think anyone would have believed what we achieved this year. I’ve never been so determined and I’ve matured a lot. For me it was a great experience to be on a small team with a lot more responsibility. I really enjoyed it. […] I had only tested the car once before the championship and it was ready. With my experience, even though I’m not a touring car specialist, if I gave the team more confidence, I was sure we would be able to do a good job and we did it! This is my best result in this championship and I learned a lot about myself. That’s important too.”

Winner of the WTCR Trophy, 3rd of the Fia WTCR general classification (only 1 point from the second, Muller), and double podium on the last two races of the season: here is how to finish a championship in beauty!