A podium and good points for Vernay at the Slovakia Ring

WTCR - Slovakia Ring - 10-11/10/2020 • Team Mulsanne lived another positive weekend in the FIA WTCR at the third round of the season, held at the Slovakia Ring. The Slovak track, where the cars built at Opera always did well in the past, proved again friendly to the Alfa Romeo Giulietta Veloce TCR by Romeo Ferraris.

The Italian squad was back to a 2-cars entry, as wild card Luca Filippi returned alongside Jean-Karl Vernay, and the results have been encouraging, especially from a performance point of view. Both cars qualified in the Top-10, with the Frenchman able to post the third time in Q1, from where he kicked-off in Race-1 finishing third.

JK gave his feeling after Race 1 : « The battle with Catsburg was not easy, but for sure he does not make a lot of effort to let you pass. He was quite slow for some reason, I don’t know why. He was super-slow and after Gabriele overtook us on the outside with a very nice move I think it was the game of Hyundai to slow me down so Gabriele could have a little gap. But that’s all, it wasn’t bad, it was more like a joke. But talking about the race, I think we can be very happy. We started P3 but like I said I was a bit afraid starting on the left side, but finally we didn’t lose position and we kept calm. We stayed clear in the first two laps and tried to avoid a collision, and we’re on the podium so I’m super-happy for the team, it’s a great effort, we had some little issue, and the guys worked really hard last night. It’s a good podium. Race 2 we’re going to start up front again and hopefully we can have another one. » 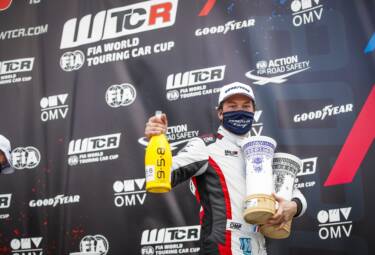 It was an unlucky Sunday for Luca Filippi, forced to go back to the pits from the grid of Race-2 because of a clutch issue, losing the benefit of the front row, in the reversed grid. In Race-3 the Italian was involved in an incident at turn 1, while the stewards dashed the efforts of Vernay, who had been the driver conquering most points over the weekend. Respectively 2nd and 4th in the last two races of the event, Jean-Karl was sanctioned for contacts had with Yvan Muller and Norbert Michelisz, losing the third position in the standings that he had clinched on the track.

JK after race 3 : « I have made a good. I was P7 on the grid and could overtake everyone before Turn 1 and I was right behind Norbi, who was on the inside. I just wanted to be on his butt and to come with him to Turn 2, but he braked 50 metres before the corner where it’s a flat corner. For some reason he braked pretty hard and I hit him. I am sorry for him, it was not my intention and I have good relations with Norbi, he is a very fair driver. But I think he just wanted to let Nicky past on the outside but I was there. Sorry for him but I couldn’t do anything. After that I tried to come back at Nicky, the car felt good, but he was slightly too quick and by the end I was just managing the tyres to be sure we finished P2. Overall I’m super-happy, overall it was a good weekend. Not happy about what happened in Race 2, the fight was completely unnecessary and what I wanted to say is to make sure that Néstor is doing well, even if I don’t have to apologise for anything about that, but I hope he is doing well. It is not the thing I like, when people are getting so aggressive. It happened to me five times on the first lap. I’m happy to leave and to go back home, I still have it [in my heart] and I didn’t appreciate all of this. »

Michela Cerruti, Romeo Ferraris Operations Manager : « Beyond the final results, this weekend we have proven how competitive our cars continue to be in a competition of the highest level as the FIA WTCR. The results gained on the track both in the races and the qualifying sessions are a great reward for all our efforts, and further proof of the capabilities of our mechanics, who changed the clutch in Luca’s car in only 25 minutes. I am very sorry for him, as he has little experience with the Alfa Romeo Giulietta Veloce TCR by Romeo Ferraris and has lost a valuable opportunity to acquire mileage and to maximize his potential. I was left with a bitter taste by the attitude that the stewards had towards Jean-Karl. In an event full of incidents and contacts, they basically focused only on him. We take note of these decisions that we respect but do not share on the way to Budapest in a few days. »