Brilliant result in WTCR Race1 for Vernay at Nurburgring

The WTCR heads to the Nürburgring Nordschleife for the third event of the all-action season. Measuring 25.3 km in length and with a succession of climbs, dips and 64 heart-stopping turns to tackle, the Nordschleife is a difficult track to race. Three-lap races will decide who will be the King of the Ring. Four customer racing brands (including Jean-Karl Vernay for Audi in Morocco) have won in 2018 so far. 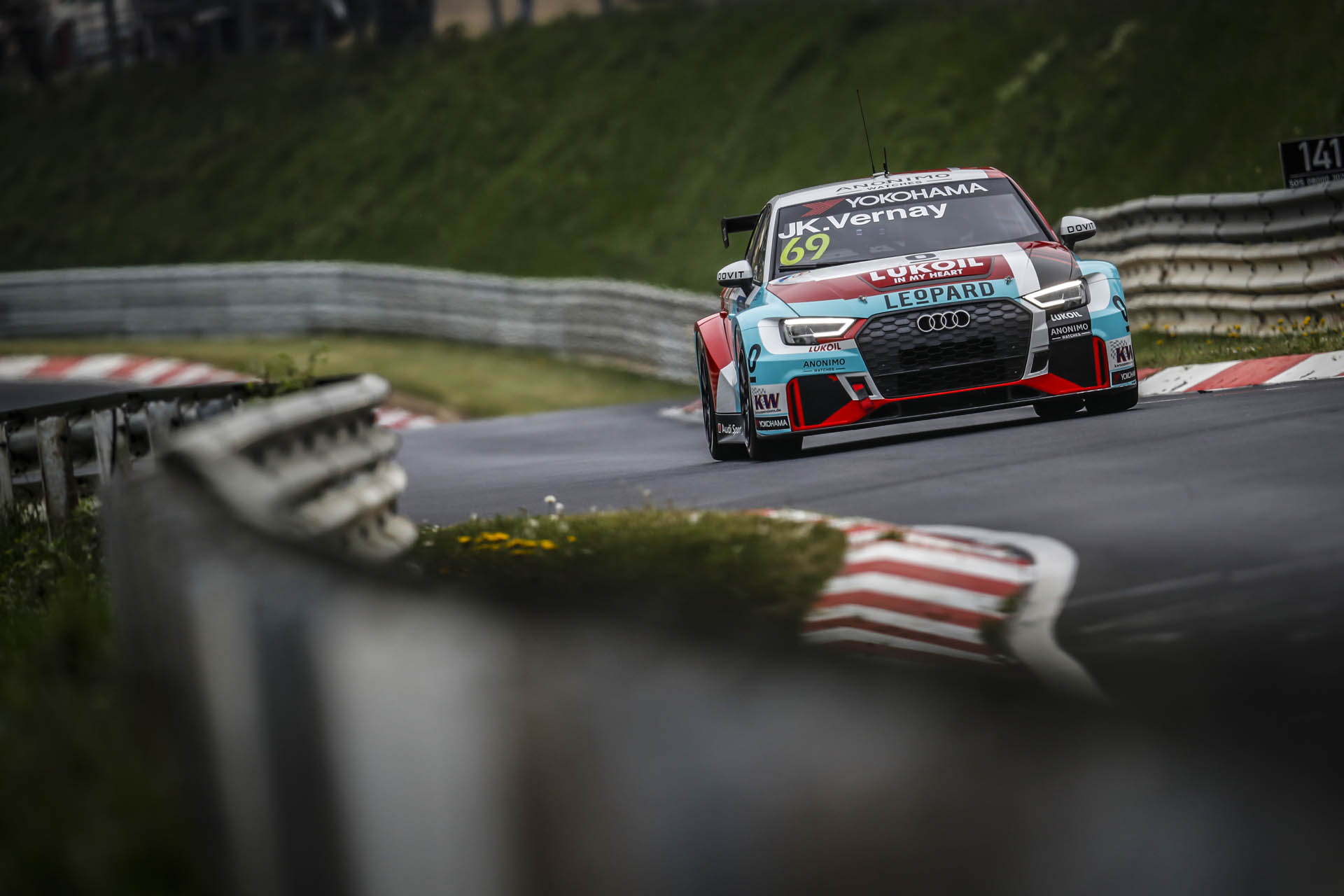 JayKay closed the Q1 in 9th in his Audi RS 3 LMS. In race 1, Yvan Muller took his first win of the season. Both Audi Sport Leopard Lukoil drivers improved their positions to 5th position for Vernay and 7th for Shedden.

On lap 1, the small group of rivals were fighting for the fifth position when the Italian lost his car and crashed. Moments later, Vernay was chased by Rast, while Gordon Shedden overtook Coronel for seventh.

Jean-Karl VERNAY – 5th:
“It was a pretty good race, especially taking into account I was blocked by another driver on my fastest qualifying lap  which hurt a lot and I couldn’t be better than P12. The car was great, I had a strong start and a good pace to reach P5. I think it was the best we could achieve. It’s big points and I am really happy. Hyundai are definitely out of contention for us but we still did a really good job. P5,6,7 is a good effort from the team. let’s see how it goes tomorrow. I’m still learning the track and I understood a lot more things during the race so hopefully the best is yet to come.”

Vernay again in the points

The Frenchman and the Scot proved all their racing qualities on the difficult round of WTCR Race of Germany at Nurburgring. The heroic work in the Audi Sport Leopard Lukoil Team garage by their mechanics on the Shedden’s car between Race2 and Race3 today.

On Friday afternoon Thed Björk repeated himself and conquered his second Pole Position after winning a fantastic qualifying battle on the Nürburgring Nordschleife: the Swede imposed his M Racing YMR Hyundai in a thrilling second Qualifying session in which lap times dropped dramatically. After a strong 1st part of qualifying, in the last Q2 moments, Audi Sport Leopard Lukoil teammates Vernay & Shedden found themselves bumped down to P11 and P15 respectively, with championship leader Gabriele Tarquini between them in P14. 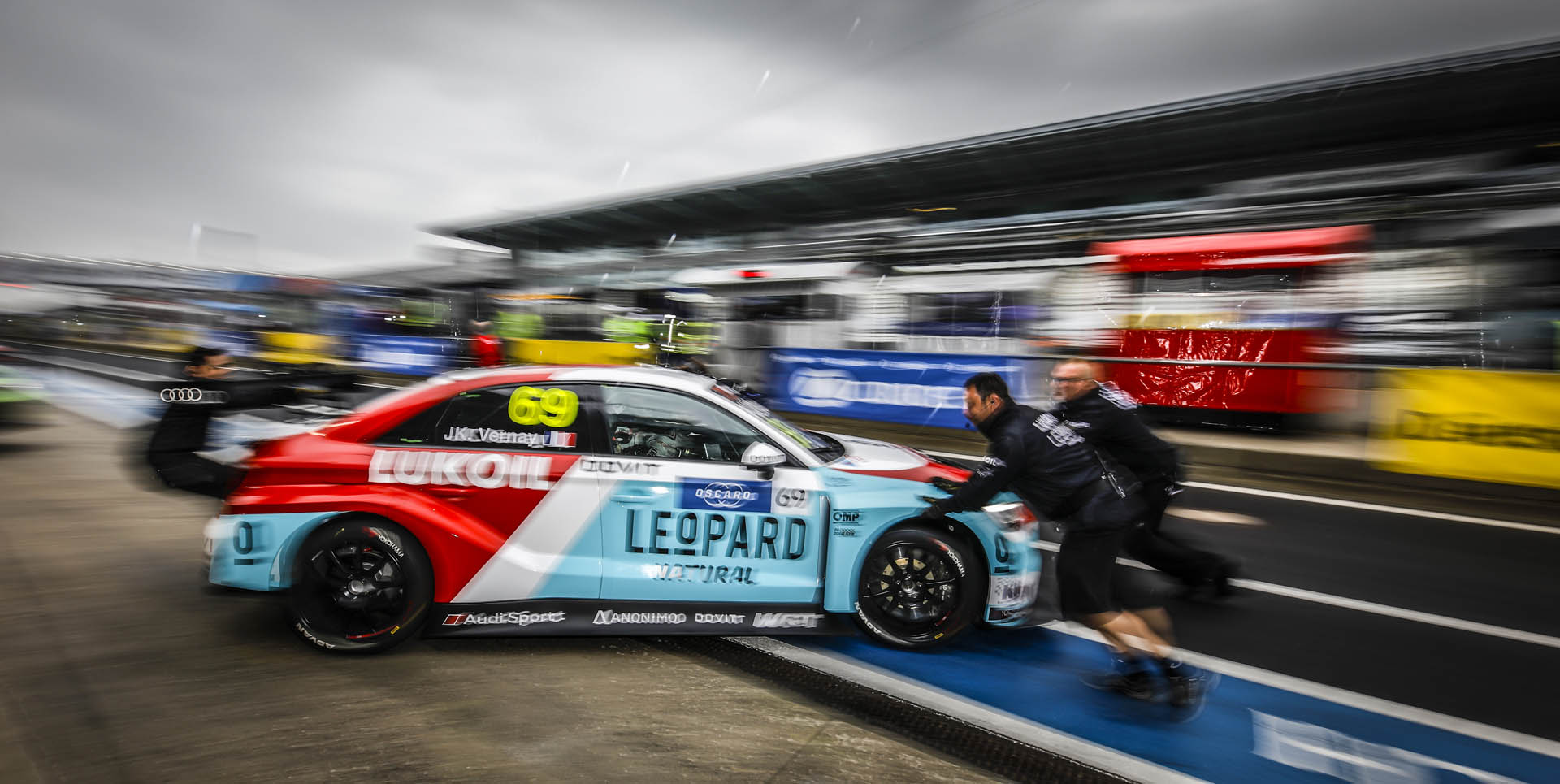 Race 2 of WTCR Race of Germany took place on this Saturday morning at 11:00 local time over the distance of 3 laps. Esteban Guerrieri rose from third o

n the grid to win on his Honda from the first lap to beat reverse-grid Pole Position starter and Nordschleife rookie Pepe Oriola. Wildcard entry René Rast struggled away with a clutch problem and then clashed with Rob Huff’s Volkswagen and speared off the track. Further drama on lap 1 down the field: championship leader Gabriele Tarquini crashed out, after contact with Gordon Shedden’s RS 3 LMS. Vernay claimed seventh, while Shedden survived his moment with Tarquini to finish eighth in his Audi Sport Leopard Lukoil Team entry.

Thed Björk made a clean start and swooped right to defend his lead from fellow front row starter Vervisch into Turn 1, as the Belgian was chasing his rival during all the race with a door-to-door contact, but positions did not change. Vernay closed as 7th again and his teammate Shedden ended 14th with an heroic work of the Audi Sport Leopard Lukoil Team mechanics between Race2 and Race3, to repair Gordon’s car and allow him to contest the last race of the weekend. Thed Björk claimed his first win of the season, becoming the seventh different winner jumping on third in the Drivers’ standing behind new leader Muller and Tarquini. Vernay & Shedden are in 8th and 14th overall, while Audi Sport Leopard Lukoil Team confirms his 5th place in Teams’ standing with 106 points. The WTCR will resume next weekend with the WTCR Race of Netherlands at Zandvoort for rounds 10, 11 and 12.

#69 Jean-Karl ‘Jay Kay’ VERNAY:
“I am pretty happy with the weekend as a whole. I tried to do my best all weekend. Race 1 was pretty good but we were just lacking a bit of performance with our car compared to the other Audis. Race 2 could have been much better again but I got hit in the first lap and lost two positions. There was a lot of contact which wasn’t really always fair but we managed to score points. I think I’m the only one to score points in every race so that’s pretty good. Now we just need a little more performance.”