WTCR – “In Hungary, take what can be taken”

On the 4.3 km Hungaroring circuit, the Frenchman produces great performance. The Audi Sport Leopard Lukoil Team confirms as the best Audi team on the grid.
Marrakech Race 2 winner Jean-Karl Vernay was the best of the Audi contingent, in 11th: the Audi Sport Leopard Lukoil Team driver took his RS 3 LMS in a time of 1’53.900; while his teammate, triple British Touring Car champion, Gordon Shedden had to start from 25th position on his first visit to the Hungaroring.

Vernay scores important points for the championship in a tricky Race1

Race 1 of WTCR Race of Hungary took place at 15:25 local time. After soaring from fifth on the grid to the lead in just two corners, Yann Ehrlacher scored the Saturday victory: the Frenchman made a great start, but it was a squabble between the drivers ahead at Turn 2 that gave him an opportunistic lead he would not lose.
In that begging chaos the Thed Bjork’s Hyundai dropped from third on the grid to 8th place, right in front of Jean-Karl Vernay’s Audi RS 3 LMS. On lap 4, the former TCR Champ put his rival in his sight and overtook the Swedish with a superb maneuver.

#69 Jean-Karl VERNAY:
“Today was tricky I would say. It wasn’t the greatest track for our car but we did well to qualify in P11 and then finish the race in P8, but scoring the points. Not too bad especially when we compare ourselves to the other Audi cars. I’m pretty happy with my own performance but I hope the championship will change the BOP.” 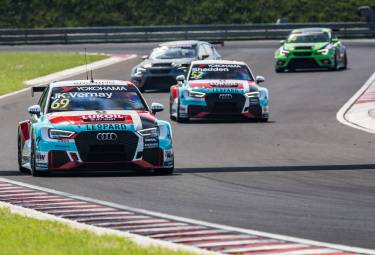 Rob Huff drew on all of his vast experience to control the reverse-grid Race 2 all the way to score his first victory in the WTCR – FIA World Touring Car Cup: the Briton converted his Pole Position into the lead at the start, diving right to hug the inside line into Turn 1 and hold off fellow front row starter the local wildcard entry Daniel Nagy, who was cheered all the way by a wildly enthusiastic partisan crowd. Yvan Muller, who started fifth in his YMR Hyundai, completed the podium.

Gabriele Tarquini broke the hearts of the enthusiastic masses in the main grandstand by beating national hero and team-mate Norbert Michelisz to victory in Race 3: the Italian veteran extended his points lead since the first braking at Turn 1. Meanwhile, Esteban Guerrieri was judged to have jumped the start with a drive-through penalty and drop down the order. On Lap 3 the safety car was called on track to remove the Aurélien Panis’ car, as racing resumed on Lap 5. But 1 lap later, the threat of rain had hung over the circuit and the race was red flagged before a new restart in dry conditions.

In both Race2 & Race3 Jean-Karl Vernay managed an impressive start, completing a twice Top 10 as he once again proved to be the best of the Audi RS 3 LMS entries. His Audi Sport Leopard Lukoil teammate Gordon Shedden managed a remarkable comeback fight in each of today’s races for the prestigious mark of the four rings, claimed 15th and 12th place after a long battle against his rivals.

#69 Jean-Karl VERNAY:
“Well it was a difficult Sunday. I tried to do my best but we were really far, almost two seconds off the pace which is huge and unacceptable. First Audi again and I was able to make two really good races. I improved from P15 to the top ten and some points, it was the best we could do. We all hope the Audi will get better chance in the next race.”